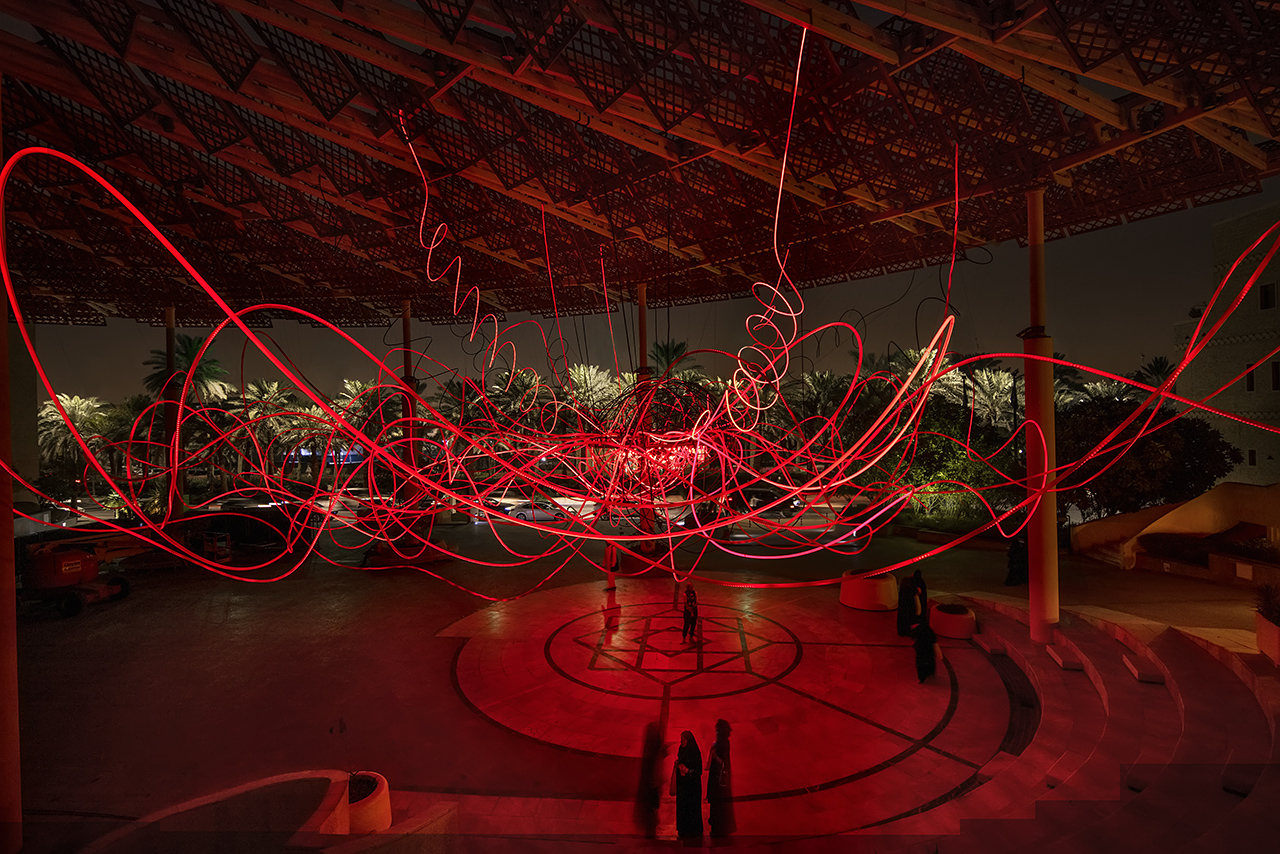 Riyadh’s sunrise, sunset and desert dunes were the inspiration to create AMPLEXUS, famous artist Grimanesa Amorós said while explaining her artwork, which is being displayed at Noor Riyadh 2022.

RIYADH — Riyadh’s sunrise, sunset and desert dunes were the inspiration to create AMPLEXUS, famous artist Grimanesa Amorós said while explaining her artwork, which is being displayed at Noor Riyadh 2022.

Speaking to Saudi Gazette, the American artist, who was born Peru, stressed that the piece was created specifically for the second edition of Noor Riyadh festival 2022 and is called AMPLEXUS which means in Latin (Embrace). It is an immersive light sculpture installation that embodies global identity.

Amorós said that the lighting sequence in AMPLEXUS that is fullly red was inspired by many sunrises and sunsets that she actually experienced in Riyadh since Oct. 1.

The color of red in AMPLEXUS also had another meaning beside the sunrises and sunsets of Riyadh.

Amorós added that, for her it was also about balance (Yin-Yang), as she noted that red may mean love and passion for some, and for others it may mean blood or something stronger.

The piece communicates directly with the contemporary and historical architecture of the Saudi capital, the viewers, and the surrounding environment by linking Riyadh’s past with its ever-evolving tomorrow, nature, and the digital world.

“One of the reasons that also makes me believe that the meaning of the artwork name is embrace is because the work is being embraced in the pillars of the architecture of the cultural palace in the Diplomatic Quarter (DQ) in Riyadh, so they all became one,” Amorós pointed out.

It is noteworthy that AMPLEXUS is being displayed at the Diplomatic Quarter, which is one of the 5 main hubs of the second edition of Noor Riyadh, and it will last until Nov.19. Amorós confirmed that she loved the architecture in DQ, and she thought this would be the perfect place for AMPLEXUS.

The artwork includes tubing structures formed with the columns of the building and reflective material installed on the floor. It will envelop viewers within their cultural heritage, community, and environment. Moreover, AMPLEXUS embraces the collective community consciousness, the city’s architecture, and the untamed magic of the desert itself.

AMPLEXUS took three weeks to be completed, and over a hundred hours of programming, with the organization of many teams working together to share what Amorós was called (LPP) which means Love, Passion and Perseverance.

She said that she thinks that Love, Passion and Perseverance is something that is part of each one of us and affects every single human being.

Amorós said, ”She is inspired by seeing how people react with AMPLEXUS by taking selfies, and the way they see the lights move.”

“One of the parts that I really liked was the amount of time each individual took to contemplate AMPLEXUS,” she said, adding, “I always love to make people think because by doing so, I inspire them. And inspiring them will make them become more creative in different stages of their life.”

She noted that Noor Riyadh is wonderful because of the way they have energized all the different neighborhoods of Riyadh, and their ability to make people be part of the light, which will enhance their curiosity in their lives.

She also added that the Saudi artists participating in Noor Riyadh are able now to share their work not only with the audience in Riyadh, but also internationally, noting, “It is wonderful how the Saudi artists are reacting when all of this is happening in their own city.”