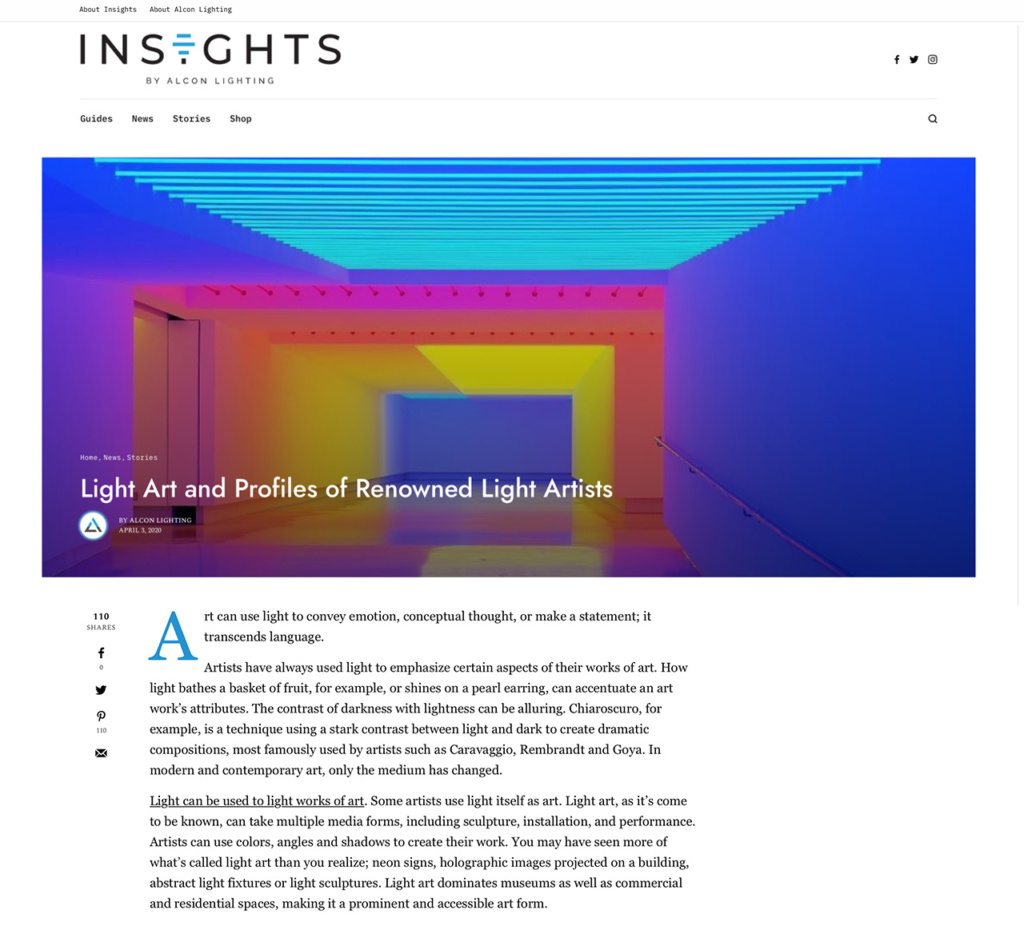 Art can use light to convey emotion, conceptual thought, or make a statement; it transcends language.

Artists have always used light to emphasize certain aspects of their works of art. How light bathes a basket of fruit, for example, or shines on a pearl earring, can accentuate an art work’s attributes. The contrast of darkness with lightness can be alluring. Chiaroscuro, for example, is a technique using a stark contrast between light and dark to create dramatic compositions, most famously used by artists such as Caravaggio, Rembrandt and Goya. In modern and contemporary art, only the medium has changed.

Light can be used to light works of art. Some artists use light itself as art. Light art, as it’s come to be known, can take multiple media forms, including sculpture, installation, and performance. Artists can use colors, angles and shadows to create their work. You may have seen more of what’s called light art than you realize; neon signs, holographic images projected on a building, abstract light fixtures or light sculptures. Light art dominates museums as well as commercial and residential spaces, making it a prominent and accessible art form.

The light bulb was invented in 1879. Yet it’s believed that an artist named El Lissitzky is the first to have used electrical light in his work — 60 years later. One of the first object-based light sculptures was made by Laszlo Moholy-Nagy in the 1920s.

But using light in art goes back to ancient culture.

“The interplay of dark and light has been a theme running from Greek and Roman sculpture to Renaissance painting to experimental film,” explained art critic Hilarie M. Sheets. “As technology advanced from the glow of the electric light bulb to the computer monitor, artists have experimented with actual light as material and subject.”

From bulb to projection

Light art as it’s known today originated in the 1960s as kinetic, or Lumino kinetic, art. In later forms, some artists used light to create psychedelic experiences. From that movement came minimalism, with artists such as the late Dan Flavin, who worked with fluorescent light tubes, playing with light as it relates to sculpture, movement and various spaces.

Neon took the light art scene in the 1980s. During this decade, electric neon lights resurged as part of the arts scene. Artists began using neon in interior design and sculpture in an effort to push boundaries.

The newest light art trend is projection mapping, which projects video onto an object, or wall. When shown against three-dimensional objects, a projected video employs color, light and movement to give the appearance of transforming a static object into something almost lifelike.

Many artists have gained notoriety using light as an artistic medium. From public space exhibitions to museum showcases, light art uses everyday encounters to express an experience, a thought or an emotion. Among artists using light:

This aerial sculpture — 100 feet of neon tubing looming overhead — now hangs in the Museo Novecento in Milan, Italy. Giant windows entice you to look out onto the famous Duomo, yet, your eyes are drawn to Fontana’s Structure in Neon for the 9th Milan Triennial at the Palazzo dell’Arte, Milan 1951 titled after the place where it was originally installed. Fontana’s light art combined what he referred to as ‘spacial concept” and “spacial environment.”

Among James Turrell’s pieces is this installation at the Guggenheim Museum in New York, where Turrell used shape and light to immerse the visitor in purple. Turrell demonstrated here that light doesn’t have to be static or displayed on a wall — he shows that light can merely be part of an experience.

In this piece, Jenny Holzer makes a statement about power by using light on words from declassified U.S. government documents. Her piece was displayed in the Whitney Museum, but Holzer’s work has exhibited in many places, including Times Square.

By spelling words with light, Ben Rubin made a mark on the light art scene. With a multimedia background, Rubin used vacuum-fluorescent bulbs to display text from a chat room in real time. By using dark and light from within a specialized light bulb, he created a unique piece.

Jim Campbell created this piece, titled Scattered Light, in 2010, showcasing passersby. With a hanging set of 2,000 LED lights, Campbell engineered the piece so that lights individually turn off as people walk by. From afar, the scene is almost spooky as you watch silhouettes glide past lights.

Installed at Pinchukartcentre in Ukraine’s historic city, Kiev, in 2011, Danish-Icelandic artist Eliasson’s inspiration for Lamp for Urban Movement is shadows and light and how the difference creates space. “Let’s say that the spheres are machines that create space,” Eliasson says. “Some of them contain a light source inside that projects fragmented light out into the space where they are hanging, like a map projection. So it is not only, or primarily, the physical object in the space that interests me, but the way the light and the shadows and the colors claim and create space together. They perform architecture, you might say.”

Peruvian-born Grimanesa Amorós lives and works in New York City as an interdisciplinary artist known for large-scale installations of light sculpture. Amorós first researches locations, histories, and communities of her sites, and incorporates various elements from video, lighting, and technology to create site-specific installations to engage architecture and create community.

In fact, it tells quite a few. Modern artists have leveraged this relatively new technology to play on an age-old fascination humans have with art and light. By experimenting with color and shape and intertwining its existence with outside materials, our public spaces and our museums, light art challenges the way we perceive the things around us.