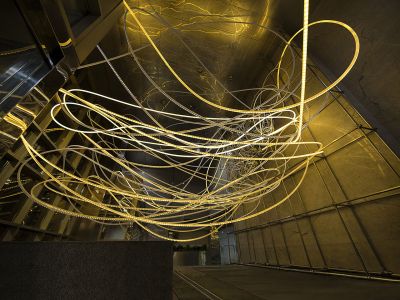 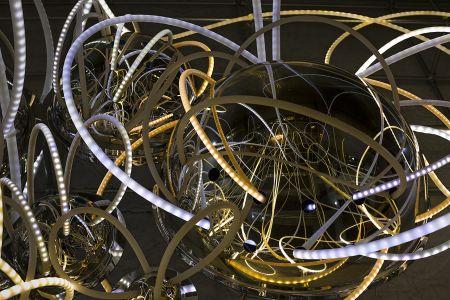 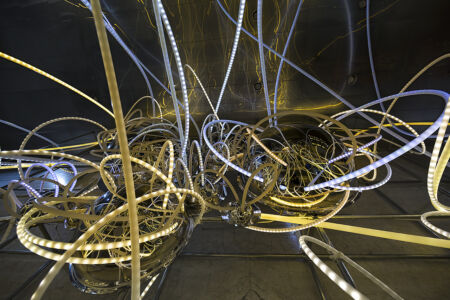 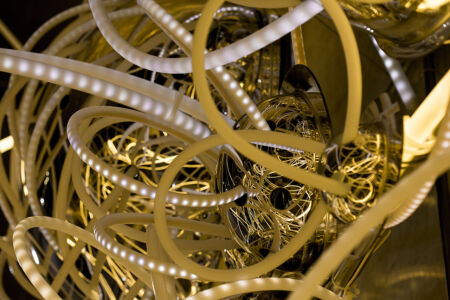 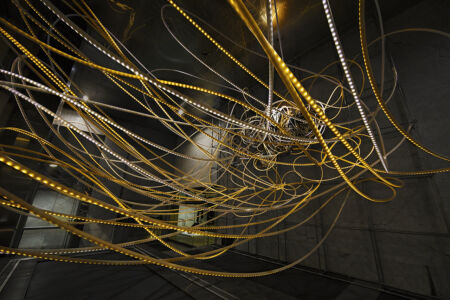 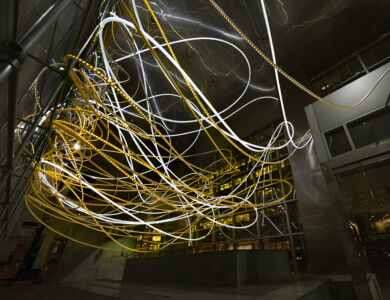 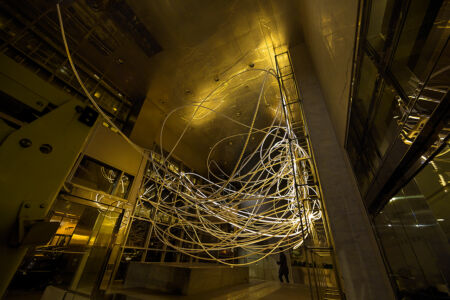 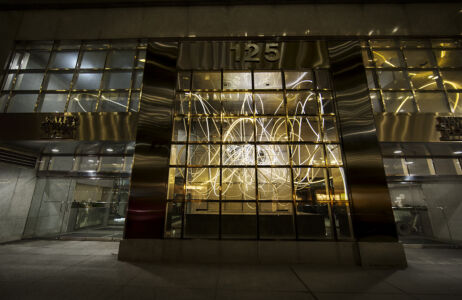 Amoros Breathless 05
Breathless Maiden Lane | Installation Side View | Financial District New York, NY
Breathless Maiden Lane, a monumental light sculpture installation, was featured in New York City’s financial district. The intent of the piece was to conjure up excitement tantamount to the energy found in the city. Amorós explained: “New Yorkers have especially developed habits of dealing with a multitude of stimuli that surrounds us every day. When viewers approach the light installation, I want to override their tendencies to ignore the environment and increase their awareness of their surroundings.”

The sculpture’s light sequence was designed to shift and change as the viewer walks around its architectural complexity. The concept of Breathless Maiden Lane is to provoke a sensation of wonderment and awe, leaving them breathless.

“Breathless” conjures the idea of excitement. When a viewer approaches my work, I want them to experience an intense response. New Yorkers have especially developed habits of dealing with the multitude of stimuli that surrounds us every day. When a viewer approaches the light installation, I want to override the viewer’s tendency to ignore their environment and increase their awareness of their surroundings.

I initially developed my concept for this project by walking around Maiden Lane. I immediately felt a strong connection and interest in learning more about the street.

I researched and studied Maiden Lane’s history. To my surprise, there were many theories about the area. In one of my searches, I discovered that the street was called Maagde Paatje when New York was known as New Amsterdam. Another fact I uncovered was Maiden Lane’s history as a winding path for lovers. This winding path provides a perspective, much like the street patterns of Lower Manhattan. Early city planners patterned the majority of the streets in this area to follow pre-existing waterways, rather than the grid pattern imposed on the majority of Manhattan. For this reason, the streets of Lower Manhattan appear chaotic.

The surroundings, the energy, and the people created this busy area. The lane prompted a feeling of BREATHLESSNESS.

This installation includes different sizes of white tubing and various shades of white LEDs. I placed a gridded metal truss against the back wall of the marble atrium in response to the soaring windows that dominate the building’s architecture. BREATHLESS MAIDEN LANE gives the sensation of rays of light hurtling toward the viewer. With this work, I invite viewers to discover a new way to see and experience Maiden Lane.

Like many of my large-scale works, I created BREATHLESS MAIDEN LANE for the community and the many individuals who walk by 125 Maiden Lane every day. With this work, I continue to explore my fascination with the intersections of light, sculpture, abstraction, and landscape.

The sculpture’s light sequence will shift and change as the viewer walks around its architectural complexity. The concept of BREATHLESS MAIDEN LANE is to allow the viewers to feel a sense of wonderment and awe.