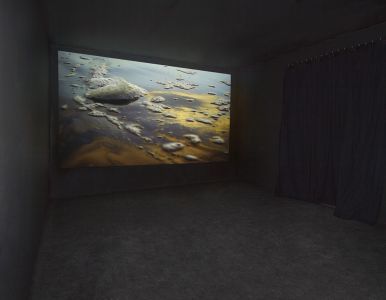 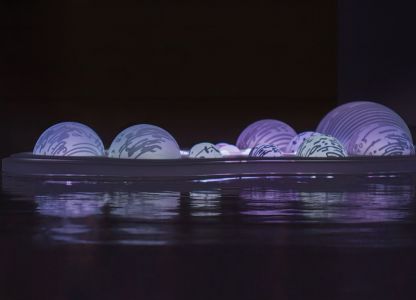 Light Between The Islands is an installation that includes islands of shimmering white bubbles, composed of various sizes, handmade from a different mold, and with drawings silkscreened over each of their surfaces. The bubbles that form the installations are a part of modular units and layers. Amoros multiplies and arranges the units into structures that could become monumental in scale, all the while appearing to be weightless.

The appearance of the artworks will change as the light that streams through the gallery’s front window changes throughout the day. Sometimes the installation will seem buoyant and ethereal, while at other times it will appear to be a solid mass. In any guise, she intends Light Between The Islands to convey a sense of wonder and playfulness. As visitors walk around, they will encounter and react to the presence and magic of her beloved Uros Islands in Lake Titicaca.


Litvak Gallery, founded in 2008, expanded its reach in early 2012 by representing artists of all media with showcases of contemporary Israeli and international artists.

What drove the Uros to construct and inhabit these migratory islands is unclear; perhaps they were driven there by the Incas around the 13th century or by the Spanish in the 16th century. Others say the Uros may have settled there several thousand years ago seeking relief from a severe drought. In any case, the Uros have lived on these islands for centuries, by fishing, hunting for birds, and growing a few crops.

The Uros used the totora reeds not only to construct the islands and to make their boats, houses, and furniture but as a food and fuel source as well. Each of these buoyant islands, up to 12 feet (about 3.6 meters) thick, supports several thatched dwellings, usually housing members of a single extended family. The largest island has a watchtower built entirely from totora reeds. However, the islands require constant maintenance to survive. New layers of cut totora must be added repeatedly to replace those rotting beneath the surface of the water. The islands are kept afloat by the gases caused by this decay.

Grimanesa Amorós often has drawn upon these important Peruvian cultural legacies for inspiration for her large-scale light-based installations, which she has presented around the globe from Mexico and Beijing to New York Times Square. A joyful and generous spirit, Amorós views her art as a gift to others and in Light between the Islands, her first exhibition at the Litvak Gallery (as well as in Israel), the artist is sharing her passion for the Uros Islands.

Amorós has stated that “We all live in bubbles” and can never fully know one another. Isolated throughout the gallery are islands she has created using polycarbonate bubble forms that also refer to the seafoam the artist loved as a child. Imagery reminiscent of totora reeds is silkscreened onto the spherical forms, which are illuminated from within. These glowing orbs change throughout the day and into the night, as do lights in the window and in niches in the gallery’s walls.

This exposure to the outside world has brought change. Pollution in the lake has taken a toll on the fish and birds that once were plentiful there. The islanders use solar panels and motorboats and have a radio station and an elementary school. Many younger members of the community seeking new opportunities have moved to the mainland. A few hundred people still live as fishermen on less accessible islands further out on the lake. However, there are new islands closer to shore that has been built specifically as tourist attractions, with “inhabitants” who are on the islands only during the day to sell souvenirs to tourists. In the past, the totora watchtowers were used for surveillance and protection from enemies; currently, they offer tourists a better vantage point for taking photos. As with so many other world heritage sites, tourism is endangering the very thing it seeks to preserve.

Grimanesa Amorós continues to mine images from Peru’s history for her art but she does not hold an essentialist or nostalgic view of her subject. She is completely comfortable using the latest technologies and materials, and she often gives talks at universities where her lectures not only attract future artists but students and faculty engaged with science and technology as well. And Amorós’ bubbles are a current hot topic: there is an intensive study of these mysterious, insubstantial objects going on in the disciplines of physics, medicine, environmental studies, architecture, and economics. Nanobubbles may help to advance cancer treatments and to clean up water pollution, one cause of the algae blooms that give birth to sea foam. It feels to me as though, somewhere in the art of Grimanesa Amorós, the past is meeting the future.