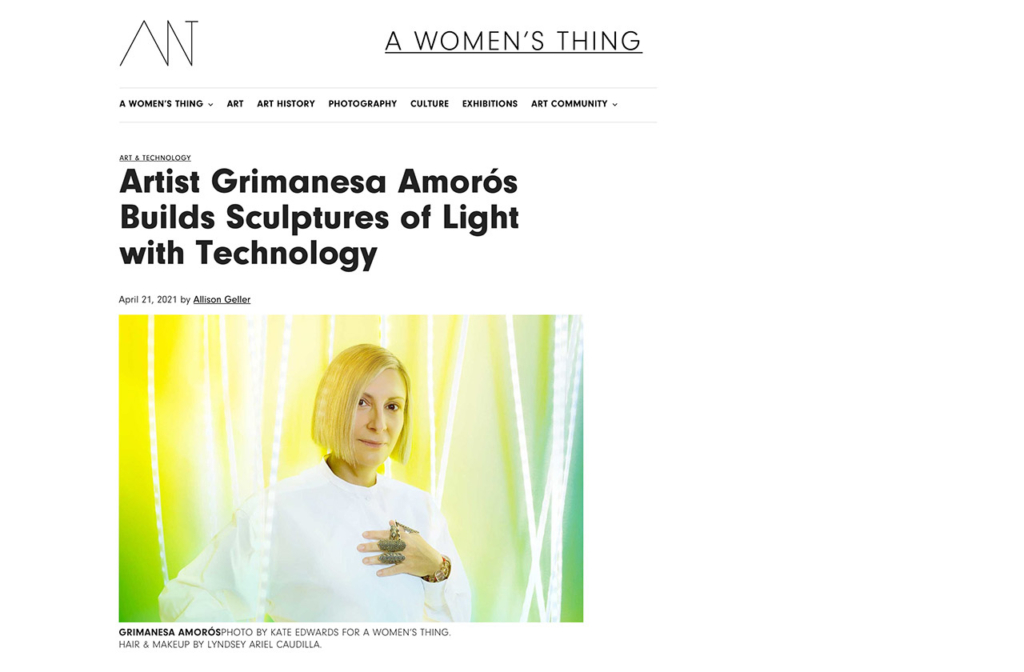 New York-based artist Grimanesa Amorós uses light in a big way. The large-scale installations for which she is best known pairs programmed LED lights with other media to embody natural phenomena and human strength, informed by the culture of her native Peru. (Not to mention powerful woman: PINK LOTUS, a 2015 installation outside Manhattan’s Peninsula Hotel, captured the essence of Ceres and Diana as part of an initiative to raise breast cancer awareness through art.)

While Amorós will tell you that she doesn’t have a “pedigree resume” and that her role as a mother is as important as her identity as an artist, her CV speaks to her decades-long dedication to her work. She has received multiple awards from the National Endowment for the Arts, spoken at TEDGlobal and the Rhode Island School of Design, and been exhibited in public spaces and museums from Beijing to Tel Aviv. Combining an enthusiasm for technology’s boundless possibilities with a fascination with the ephemeral, we thought Amorós work was just as magical as the goddesses that inspired it.

AWT: A trip to Iceland was the starting point for your work with light. How do you learn from nature?

Grimanesa Amorós: I think sometimes transformative moments in your life happen when you least expect it. For me, it happened on a trip many years ago to Iceland. I woke up and saw this incredible sky; it was something I’d never seen before. Of course, later on, I realized that I was witnessing an Aurora Borealis, or the Northern Lights. I remember being in such awe of this magical moment. Next to me was my camera, and I thought, “Grimanesa, do you want to live in the moment, or just look through the lens?”

AS MUCH AS YOU WANT TO CAPTURE IT, IT’S IMPOSSIBLE; LIGHT IS EPHEMERAL.

I didn’t want the magic to end. That’s why, to this day, I don’t have an image of the Aurora Borealis from that night. Instead, I have the moment, which is still so present to me, as if it just happened yesterday. I found myself thinking, wouldn’t it be amazing if I had the opportunity to share this life-changing experience with others? It took me many years to figure out a physical structure for translating light. You’re only ever going to catch one second of light when it’s moving. That’s what I enjoy most about using this medium. As much as you want to capture it, it’s impossible; light is ephemeral.

AWT: What technical challenges come up when you work, and how do you deal with them?

Grimanesa Amorós: I genuinely enjoy having the opportunity to experiment and conduct research before I take on a project. I make sure any technical challenges are solved in advance by thinking ahead. By the time we go to install, despite there being issues that can pop up on site, we install with serenity since the majority of the important preparations were completed beforehand.

Challenges help me keep moving, transforming, and looking for other ways to use the technology of today. Light is constantly evolving, just like humans. I don’t know if I can move as fast as light, but I at least feel that technology keeps me active when living in my present moment.

AWT: Do you think that artists are obligated to be socially or politically engaged?

Grimanesa Amorós: I think all artists are socially and politically engaged. There are a lot of productive ways to be involved in the conversation, either by making art that draws inspiration from current global events, or by activating the local community through the use of space. This enables a conversation to begin, as well as bring in more awareness to an issue.

For example, I made an exhibition called “OCUPANTE” at the Ludwig Museum, which drew inspiration from the Berlin Wall and the plight of immigrants; those who seek to return to their land, or those who leave to create homes in new places. It is this in movement that they are transforming the space around them by simply occupying it. They are the “OCUPANTE” of their own dreams and physical realities. I like to play with words, nature, light and structure, which in turn inspires people’s imaginations. I’m not interested in controlling a narrative; I don’t necessarily want viewers to think that my narrative is the only truth.