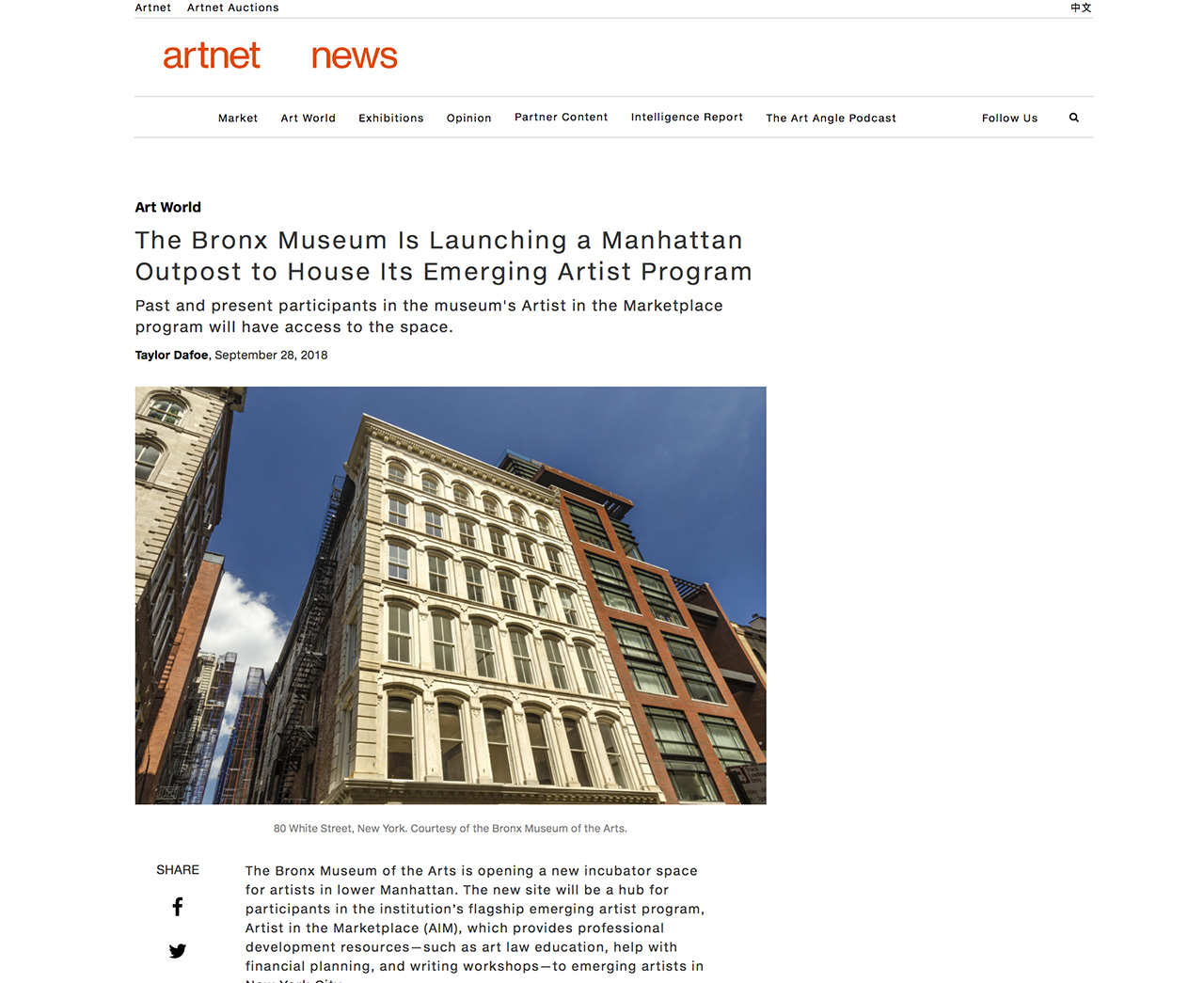 Past and present participants in the museum’s Artist in the Marketplace program will have access to the space.

The Bronx Museum of the Arts is opening a new incubator space for artists in lower Manhattan. The new site will be a hub for participants in the institution’s flagship emerging artist program, Artist in the Marketplace (AIM), which provides professional development resources—such as art law education, help with financial planning, and writing workshops—to emerging artists in New York City.

Located at 80 White Street in Tribeca, the 4,500-square-foot space was a gift from Martin Weinstein and Teresa Liszka, art patrons and longtime supporters of the museum. It’s on the second floor of a building owned by the Weinstein family that previously housed a tool manufacturing business.

AIM fellows past and current will have access to the White Street location, which includes studios, a conference room, and a space for exhibitions and other events. Among the 1,200 AIM in the city are Diana Al-Hadid, Simone Leigh, Jacolby Satterwhite, and Latoya Ruby Frazier.

“AIM is open to all New York City artists, across all five boroughs, so from a practical perspective it puts us closer to many of the artists the program has served,” said the museum’s executive director, Deborah Cullen, who joined the museum this summer. “We also view it as an opportunity to bring a little of the Bronx downtown and encourage people who visit 80 White Street to come up to the museum. It also allows us to be more closely connected with AIM alumni, and to foster and grow those relationships.”

The agreement with the Weinstein family will allow the museum to occupy the space rent-free for seven years. It will open officially in 2019. In the meantime, the museum is throwing a fundraiser party on October 25 to inaugurate the space. There it will unveil the incubator’s first permanent work of art, a site-specific sculpture by AIM alum Grimanesa Amorós, titled ARGENTUM. Commissioned by Weinstein and Liszka, the nine-foot-wide wall-mounted work is made of LED lights programmed with a custom lighting sequence. A related work is on view in the museum’s main building in the Bronx.

“As successful as AIM has been, I don’t think there’s such a thing as too much support for emerging artists,” Cullen says. “The new space allows us to pick up where AIM leaves off, providing opportunities for alumni of the program to continue to develop both their practice and careers in ways we simply couldn’t have before.”