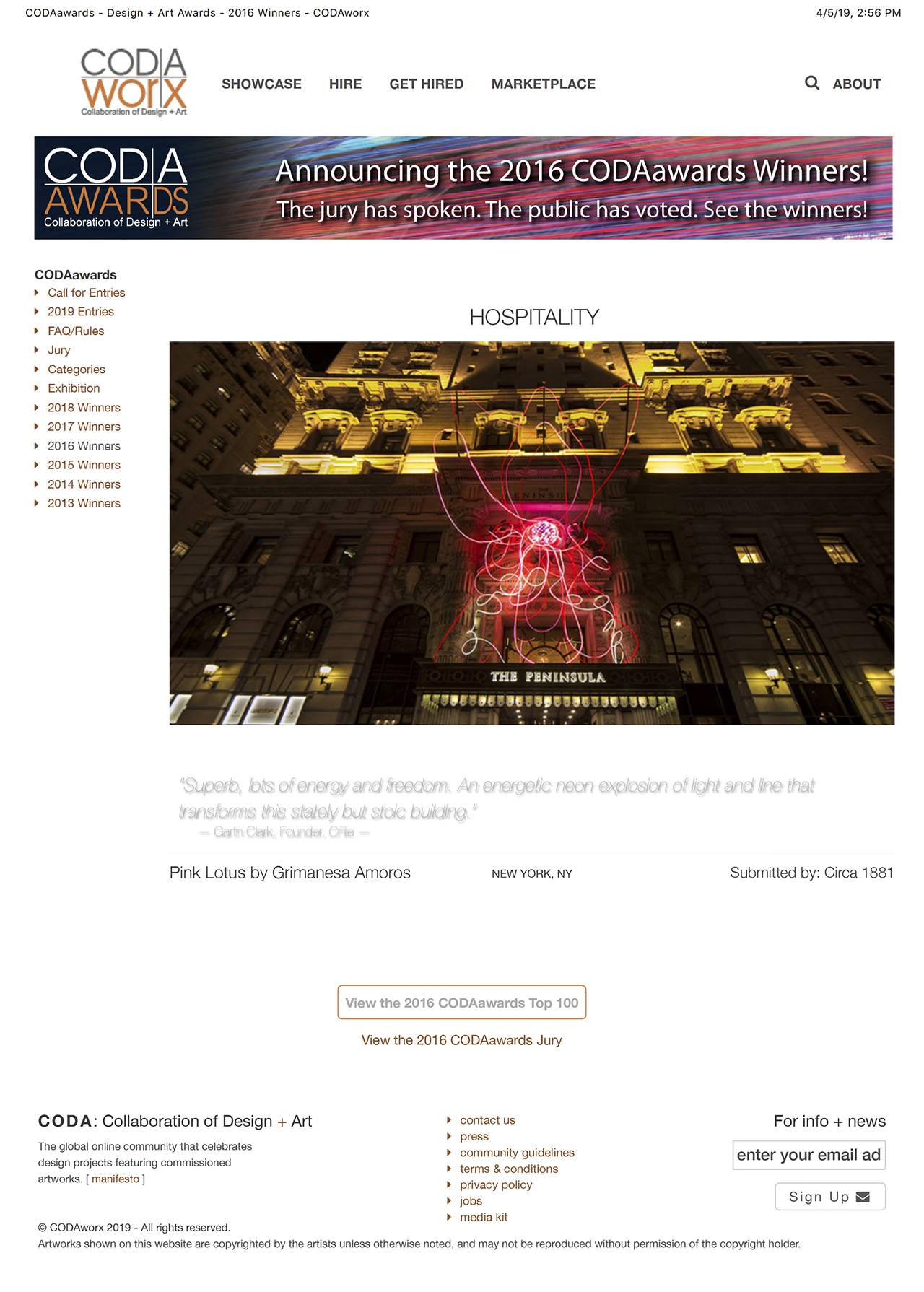 In the worlds of art and design, successful collaboration is a significant achievement not often celebrated—until now. CODAworx, the hub of the commissioned art economy, has once again partnered with Interior Design magazine to announce the winners of the fourth annual CODAawards: Collaboration of Design + Art. The CODAawards recognize collaborations that result in outstanding projects that successfully integrate commissioned art into interior, architectural, or public spaces.

Top honors were awarded to the following collaborative projects across ten categories:

“The CODAawards recognize the importance of collaboration, and honor the design and art professionals whose collective imaginations create the public and private spaces that inspire us,” said Toni Sikes, CEO of CODAworx.

In its fourth year, the CODAawards received 407 entries from around the globe, representing over $81 million USD in commissions. Winning projects were found as far as Thailand to Puerto Rico, San Francisco to São Paulo. The winners exemplify the best of what can happen when artists and design professionals collaborate to create artful spaces in our built environment. Winners include works that resulted from amazing team efforts, including the collaboration between world-renowned artist James Turrell and Landmarks public art program, Gensler Architects and artist Patrick Marold, and art consultant Circa 1881 and artist Grimanesa Amorós.

An esteemed panel of 18 jurors from the design, architecture and art worlds judged the submissions. Jury members included Cindy Allen, Interior Design magazine editor-in-chief; Cheryl Durst, CEO of the International Interior Design Association; Caroline Baumann, director of the Cooper Hewitt, Smithsonian Design Museum; Raymond Post, principal and founder of Post Architects; and Catherine Widgery, artist and 2015 CODAawards winner. The jury selected winners in each of ten design categories. Their Top 100 selections were then exhibited online in early summer, where the public was invited to vote for their favorites. Over 107,000 votes were cast to select the two People’s Choice winners.

The CODAawards were covered in the August 2016 issue of Interior Design magazine, on CODAworx.com, and through fourteen design + art partner organizations, reaching the largest, most qualified audience of design professionals.

New this year the CODAawards is partnering with The Architects Foundation, the philanthropic organization of the AIA, to create an exhibition of winning projects from the 2016 CODAawards. The exhibition will be held next year at the Octagon Museum in Washington, D.C., and will run from March 23 until late October 2017, providing award winners with unparalleled public recognition during the exhibit’s seven-month run.