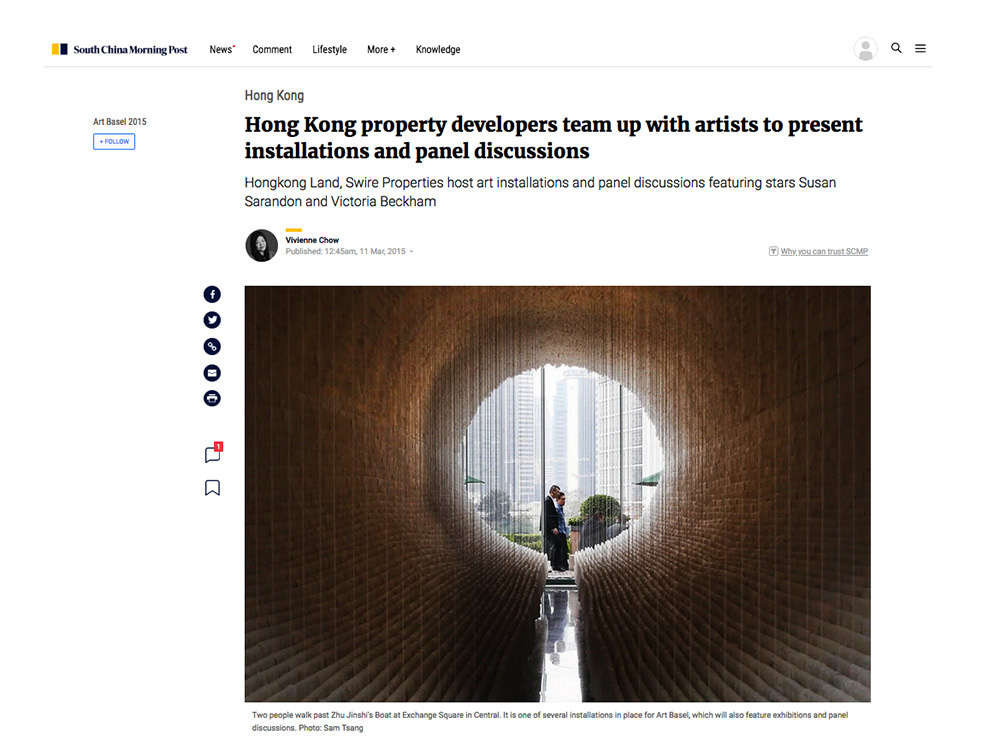 Hong Kong property developers are jostling for prominence in this year’s Art Basel arts festival with celebrities from show business and the arts world mingling with major exhibitions.

Oscar-winning actress Susan Sarandon and pop star and fashion icon Victoria Beckham will be in the city this weekend to take part in panel discussions alongside well-known artists, filmmakers and collectors.

The second, which opens at the Landmark tomorrow, will feature Take Another View on Art – a HK$140 million showcase of works by masters including Claude Monet, Marc Chagall, Zao Wou-ki and Zeng Fanzhi in an aerial structure designed by award-winning architect and artist William Lim.

Lim said: “The Art Basel week has been great for Hong Kong because it boosts Hong Kong’s cultural scene.”

Viewing art should not be limited to buying tickets for art fairs or works hidden behind the white walls of galleries and museums, he said.

“Art should belong to everyone. Making art part of our public environment is very important.”

He said the idea for the aerial structure was inspired by Michelangelo’s Sistine Chapel ceiling. Nine paintings will be suspended in the air. Spectators will be able to view them from the ground or use binoculars provided on site for a closer look.

“Hong Kong has changed a lot over the years since the days of Art HK. The public’s interest in art has been growing. Hong Kong artists are becoming more successful,” said Lim, who is also an avid art collector.

“More and more property developers are interested in using art to promote their projects. It has put art in a commercial context, but the good thing is that it allows more people to be in touch with art,” he said.

Swire Properties is teaming up with international cultural and multimedia organization Liberatum to launch Liberatum Artistry at Art Basel and screen the film Artistry and Technology by Pablo Ganguli and Tomas Auksas at Swire Properties’ lounge at the Convention and Exhibition Centre on Friday. The film will be available online for free from March 30.

On the same day, Hans Ulrich Obrist from the Serpentine Gallery will join artist Grimanesa Amoros, artist and filmmaker Isaac Julien and auctioneer and DJ Simon de Pury at another panel discussion.

In addition, Victoria Beckham will appear in a Liberatum event at Upper House on Sunday.

While the K11 mall has launched Book from the Ground by Xu Bing, an installation and design work based on Xu’s novel of the same name, the K11 Art Foundation will today host Inside China – L’Intérieur du Géant, an exhibition co-presented with Palais De Tokyo at its pop-up space in Sheung Wan.

Tomorrow, the iconic Peninsula Hotel in Tsim Sha Tsui is due to unveil a replica of a twin-axel Harrington Legionnaire coach from the classic 1969 British heist caper – The Italian Job – an installation art piece teetering on the parapet of the hotel’s seventh-floor terrace. It is a major piece by British sculptor and Royal Academy professor Richard Wilson entitled Hang on a Minute Lads … I’ve Got a Great Idea. It will be on display until April 8.