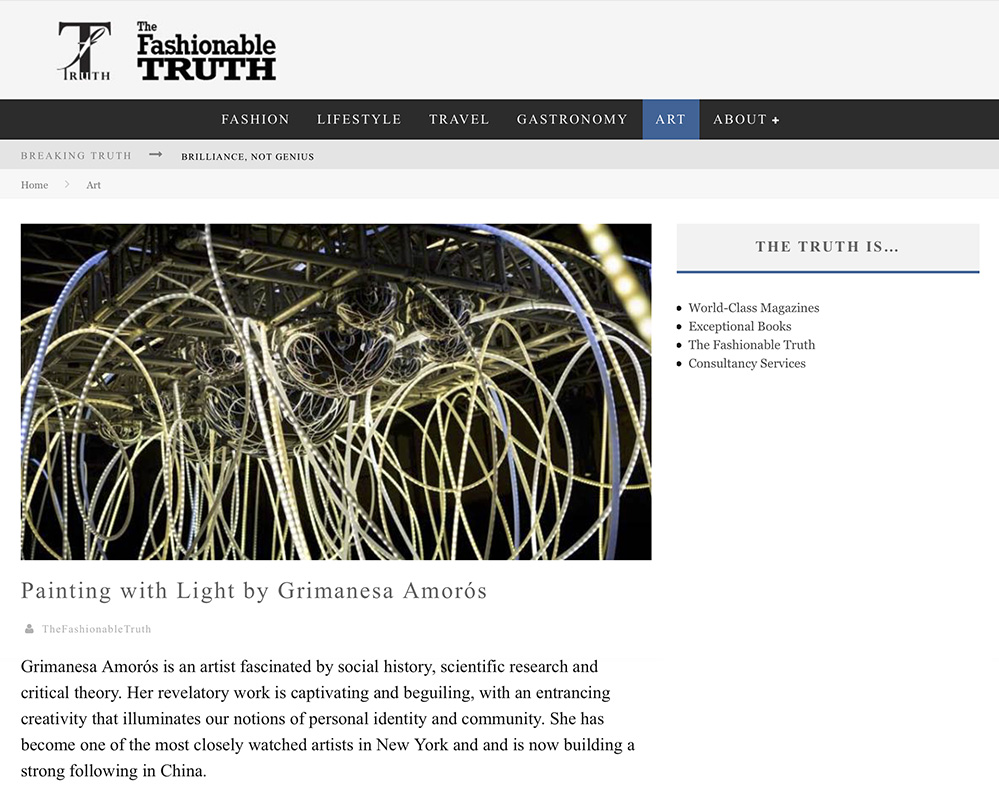 Painting with Light by Grimanesa Amorós

Grimanesa Amorós is an artist fascinated by social history, scientific research and critical theory. Her revelatory work is captivating and beguiling, with an entrancing creativity that illuminates our notions of personal identity and community. She has become one of the most closely watched artists in New York and and is now building a strong following in China.

A conversation with New York-based artistGrimanesaAmorós is like riding aWaltzer, a fairground attraction from my childhood. The contraption was a bit like being inside a chaotic rotating kaleidoscope. I’d sit with friends in a spinning car on a speeding turntable that would fling my imagination in a new direction with every beat of my agitated heart. It was thrilling and kinetic and we’d walk away with our heads spinning and a skip in our step.Amorós was born in Peru, but she has been based in New York for most of this teenage century. Her hyperbolic works incorporate elements from sculpture, video, lighting, and digital technology to create site-specific installations. Her projects bristle with energy and are designed to engage with architecture and create a sense of community through conversation.Some artists seek a place of unobtainable abstraction in their works, others strive for a sense of harmony or the capture of beauty. Amorós’s work has elements of all three but her primary goal is to communicate and participate.“I am looking to share what I do with others,” she says from her studio on the Lower West Side of Manhattan.

“It’s important for me to establish communication with my viewers, and make them think of infinite possibilities. I don’t want to control them so they just see my point of view.”

Amorós has spoken of her desire that “the piece, the person and the structure to become one”, which suggests a high and unusual degree of interaction between her work and the viewer – although Amorós might prefer the term “participant”, as many of her kinetic light sculptures seem to demand high levels of engagement.

“I want the viewers to not be distracted and be able to feel and think when they see my work,”

she says. “That will be much easier when you enter a place as a whole. The lighting sequences on my pieces, because they are ephemeral, give my work a timeless quality and that’s an aspect of the participation I’m looking for. You want to grab the moment but you can’t, it’s ever changing.”

One of Amorós’s most famous works to date is UROS, which was unveiled at the Issey Miyake headquarters in New York in 2011. The crowds that flocked to see the installation referred to the piece as “the bubbles”.

Built from translucent plastic diffusion material illuminated by carefully wired and sequenced LED arrays, the work features glowing hemispheres that evoke the floating islands build by the Uros people of Lake Titicaca. Crafted from reeds, these islands floated on the gas bubbles released as their submerged portion decomposed.

Amorós has created installations that were derived from the Uros project in Times Square, New York and at the Venice Biennale. She has often drawn upon important Peruvian cultural legacies for inspiration in work that has been presented in Mexico, Tel Aviv and Beijing. She continues to be inspired from Peru’s history but she does not hold an essentialist or nostalgic view of her birth nation. Her recent work has taken a more technological direction and her talks at museums and universities often attract students and faculty engaged with science and technology, giving the sense that her work creates a space in which the past meets the future.

“I think we are going to a time when everything and anything goes,”

she says. “The disciplines are merging, which creates much more and broader possibilities for collaborations.”

Amorós work may be evolving at warp speed, in step with the quantum leaps of technology, but it has had a common aspect throughout her recent development – a fascination with light, its forms and way of changing at unimaginable speed.

“To me light is parallel to perfection, because it’s hard to grab the moment, you can only try to achieve a relationship with it, and work towards it,”

she says. “Light fascinates me with all its possibilities and endless combinations, which creates so much to share. This technology is a tool for me, like a brush. A painter has their colors. I use light and technology.”

In her most recent work Amorós created an installation called “Big Brother”, which had its public debut at the inaugural TEDxSouth! Conference, where she was a featured speaker. The piece consists of flickering LED strips fused with domed, mirrored surfaces to create a pulsating effect that’s meant to evoke our collective consciousness. It’s programmed to flash on a continuous, erratic loop, giving it the feeling of a living, breathing organism standing guard.

Amorós sees “Big Brother” as an investigation of our relationship with the cameras that have become ubiquitous in urban life. “I liked working on ‘Surveillance’ because places like downtown are already filled with hundreds of cameras,” she says. “People walk by the cameras all the time but never look. It’s important to create awareness that we are being watched. But I also want people to look back — to become part of the conversation.”

Amorós has recently been commissioned by the Art-in-Buildings programme to do a major piece at 125 Maiden Lane, a development in Lower Manhattan.  Her approach to the piece says much about the fascinating conceptual layers in her work. The piece is called “Bretaless Maiden Lane” an is a light sculpture installation that reflects the bustling energy of downtown New York City.

“I studied Maiden Lane’s history,” she says. “Early city planners patterned the majority of the streets in Lower Manhattan to follow pre-existing waterways, rather than the grid system of midtown. That’s why the streets of Lower Manhattan appear to be chaotic. Maiden Lane’s winding path made it an attractive place for lovers. The surroundings, the energy and the people created this busy area. Maiden Lane prompted a feeling of breathlessness.”

Amorós  now has her eyes firmly set on doing work in Asia, which she regards as a spiritual home.

“I love eastern culture,” she says. “I feel like I might have been living in Asia in another life, so I’m re-learning everything I’ve already had within myself. That’s why most of the people in my studio are from different parts of Asia; it makes me feel like home.

“What I like about Asia artists is that they live in the present moment and they are open to learn from other cultures to see what’s going on in the western world and they want to share their work with a wider community. I want them to be fascinated with the work, then we can have a dialogue, but that is just everywhere not just in China.”

Amorós is increasingly catching the eye of galleries and curators in Asia, and with her commitment to creating work that is participatory it’s likely that she will be soon casting a bright light across the China art scene, as museums and galleries look for work that inspires a population that is new to collecting and is seeking artists who understand the powerful forces that motivate the human imagination.