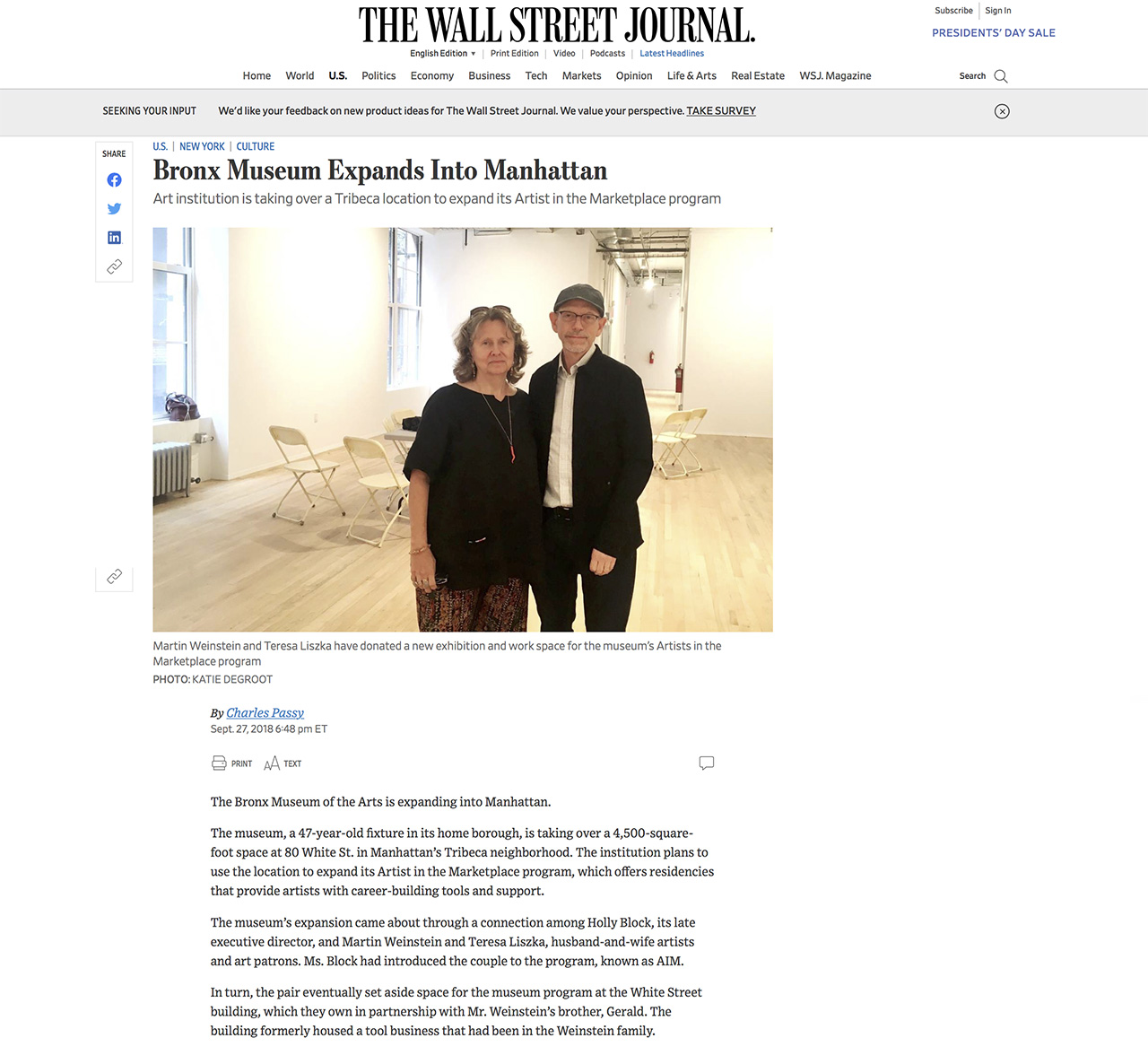 Art institution is taking over a Tribeca location to expand its Artist in the Marketplace program By Charles Passy Sept. 27, 2018 6:48 pm ET

Martin Weinstein and Teresa Liszka have donated a new exhibition and work space for the museum’s Artists in the Marketplace program PHOTO: KATIE DEGROOT

The Bronx Museum of the Arts is expanding into Manhattan.

The museum, a 47-year-old fixture in its home borough, is taking over a 4,500-square-foot space at 80 White St. in Manhattan’s Tribeca neighborhood. The institution plans to use the location to expand its Artist in the Marketplace program, which offers residencies that provide artists with career-building tools and support.

The museum’s expansion came about through a connection among Holly Block, its late executive director, and Martin Weinstein and Teresa Liszka, husband-and-wife artists and art patrons. Ms. Block had introduced the couple to the program, known as AIM.

In turn, the pair eventually set aside space for the museum program at the White Street building, which they own in partnership with Mr. Weinstein’s brother, Gerald. The building formerly housed a tool business that had been in the Weinstein family.

The initial plan calls for the museum to occupy the space at no cost for seven years, Martin Weinstein said. It’s set to open by early 2019.

For the Bronx Museum, the move into Manhattan comes at a pivotal time.

The museum has raised more than $15 million to make key enhancements and upgrades at its home along the Bronx’s Grand Concourse, Ms. Cullen said. A $10 million endowment campaign also is planned, using an anonymous $1 million contribution.

Ms. Cullen said the Manhattan move doesn’t deflect from the museum’s mission in its home borough. At the same time, she said, “It’s an opportunity for us to bring the best of the Bronx into another space.”

Mark Walhimer, a New York-based museum consultant, said the Manhattan outpost could help the Bronx institution with fundraising. Some Manhattan-based donors might be more inclined to attend an event in Tribeca than in the Bronx, he said.

Moreover, the Manhattan location “gives the museum cachet,” he added.

The Tribeca space will serve the 1,200-plus AIM alumni, who will have the opportunity to attend a “next level” career-development program at the location, the museum said. It also will showcase work by AIM artists.

To that end, Martin Weinstein and Ms. Liszka commissioned a site-specific sculpture, “Argentum,” by AIM alumna Grimanesa Amorós, for the White Street building. The piece reflects the shape of Manhattan and the Bronx in keeping with the museum program’s two-borough ambitions, the artist said.

Ultimately, Martin Weinstein said he envisions the Tribeca space being a place where AIM artists can convene and learn from one another.

“It’s a bit like the Harvard Club for AIM,” he said.

Write to Charles Passy at cpassy@wsj.com