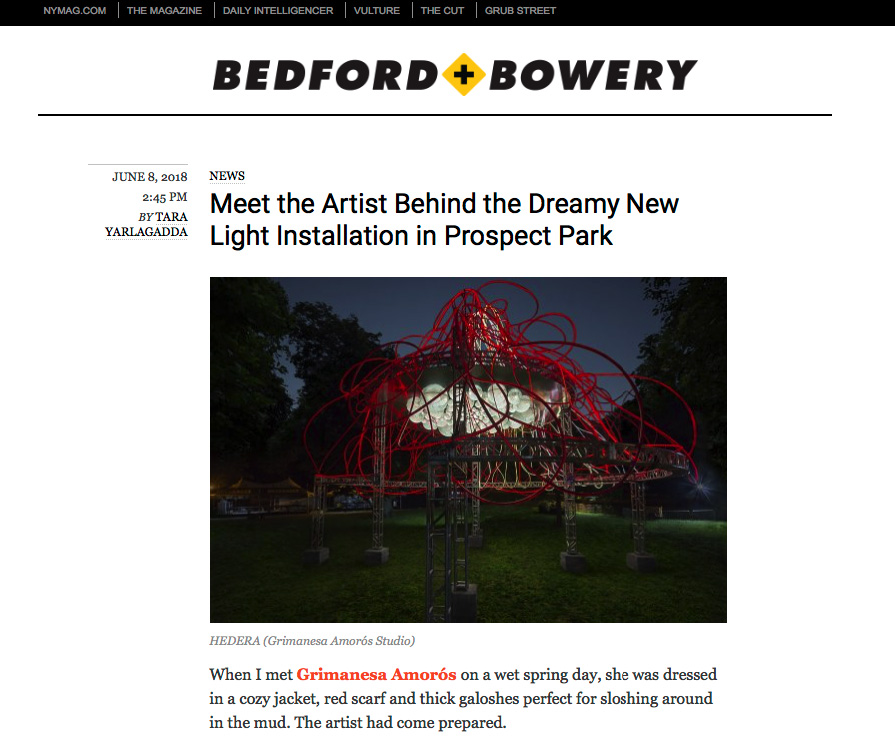 When I met Grimanesa Amorós on a wet spring day, she was dressed in a cozy jacket, red scarf and thick galoshes perfect for sloshing around in the mud. The artist had come prepared.

Amorós greeted me warmly, like an old friend, as she gave me a preview of HEDERA, the latest in a long line of other-worldly light installations that have been displayed across the world from the Middle East to Latin America.

HEDERA is intended to resemble the cavernous shape of the adjacent Prospect Park bandshell, where Common kicked off the BRIC Celebrate Brooklyn! Festival after the lighting ceremony on Tuesday night. The massive installation is draped with 2,000 square feet of LED lights and tubes, which bear a strong resemblance to plant tendrils dwarfing the bandshell in a sort of dystopian Prospect Park. Hedera is Latin for ivy. Here, the “ivy” transitions from a translucent white color to a blood-red hue while, underneath it, several globes change from aquamarine blue to ruby red.

It’s clear HEDERA is a piece of art tailor-made for the Instagram age. But it’s also a feat of a brilliant mind. The color-changing globes resemble the frothy bubbles from Amorós‘s childhood in Lima. Growing up by the Peruvian seashore spawned an obsession with bubbles, and they appear in many of her pieces.

“In Peru, in March, the fisherman will say, ‘Oh, the ocean is sick.’ Because it would throw a lot of foam. As a little girl, I would pick the bubbles. There was so much foam you could even hide under it,” recalled Amorós.

Ambling around her father’s work sites—he was a civil engineer—also accustomed her to being around mostly male crews and ignited her passion for collaborative works. On any given day, the crew at HEDERAranged from seven to 10 people. The long hours spent installing the behemoth sculpture bonded the artist and her crew. “It becomes like a family afterwards,” said Amorós.

Before coming to the U.S., Amorós studied psychology at college in Peru and visual arts informally in her spare time, but she realized her heart was more into the latter than the former. She stood on the balcony of her university and gazed upon passing clouds, which reminded her of a poem by Pablo Neruda. She admired the poet for how his work evoked the reader’s senses, similar to what Amorós’s own sculptures did to viewers.

“And I said, ‘You know what, Grimanesa? I’m leaving. I’m going to New York.” And she did, ditching her university just a few months shy of graduation.

Amorós continued with a smile, “I came to New York with two bags and many, many dreams.”

After moving to the city in 1984, she linked up with the Art Students League of New York on 57th Street and frequented the Met to learn the techniques of the masters like Paul Cézanne.

But her heart was really into sculpture, which she didn’t really have a chance to explore until a trip to Ghana in the 1990s funded in part by the National Endowment for the Arts. She learned about the local cultures and artwork while passing through several villages in West Africa, particularly the asafo flags from the warrior groups of the Fante people. That trip inspired her to create her first sculpture installation back in New York. She dubbed it Fotomana, which meant “welcome” in a local dialect from the Ivory Coast.

Amorós began working with theater lighting in her installations, but she eventually switched to LED equipment and acquired a reputation for dazzling light works that elicited some memorable reactions from the public. Chuckling, she recalled how a man frantically flagged her crew down on the last day of a 2015 installation in Scottsdale, Arizona. The man said to her, “Every day, I have 35 people, and then I charge them $25 to see the light installation. So, what am I going to do tonight?”

More than a year ago, Elizabeth Ferrer, Vice President of Contemporary Art at BRIC, approached the artist about doing an installation for their 40th anniversary. And thus was born HEDERA, with its ivy-like tubing inspired by the park’s flora. “There are many different types of this plant growing all over the park,” Amorós told me. “My intention is that the architecture [of] the piece—the landscape in this case—and the viewer becomes one.”

The orbs, pulsating with electricity, are something like flowers opening and closing, Amorós explained.

“The lighting sequence is basically like composing music. Both are ephemeral—sound and light. And to me, it’s about how the notes—how the lines—are going to be appearing. How they’re going to be disappearing. It’s very important, you know, the transition.”

As I gazed upon HEDERA, it was clear Amorós had spent hours combing through minute details and bringing together her crew with kind praise and a dazzling vision to create an ethereal experience for the viewer.

The long work days—which could reach up to 18 hours—wore on the mind and body, admitted Amorós.

HEDERA will be on view at the Prospect Park Bandshell through August 11 as part of the BRIC Celebrate Brooklyn! Festival. An artist reception with Grimanesa Amorós will take place on June 23 at 6 pm. Further details here.